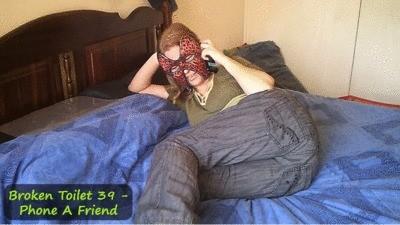 I always wanted to try this and finally got the chance. Phoned one of my English speaking girlfriends and spoke to her on the phone WHILE shitting and having my slave eat it, some of it right out of my ass! I repeat, WHILE talking to her on the phone! She was none the wiser of course and it made it just that much more erotic and naughty!What made this so special was that it was REAL. I was really talking to an English speaking girl friend of mine whom Ive known since high school (she doesnt know about my fetish lifestyle) Long story short, I phoned her for two reasons. One: She speaks English and I want you all to know what we are saying during the phone conversation. Two: She talks a LOT! From 06:55 to 07:40 in the video I didnt get a word in LOL It was during this time my slave moved the camera & equipment. I left this in for you because I like making the minimum cuts during my videos.While I was talking to her I was on the bed and pulling my pants down and putting a small clear sheet under my bottom. During our conversation I started to shit. It was a thick & solid log and took strong pushing to get out. She heard my heavy breathing & grunts and wanted to know if Im okay. I assured her its just cramps and Im fine lolAfter I pushed the first thick turd out my slave came to lick my ass clean. I referred to him as Cleaner to assure my friend on the phone wont get suspicious. He licked my dirty asshole clean WHILE I was on the phone with her. Then, in full view for you he ate my turd, chewed and swallowed it right in front of you. No cuts, no dropping out of view You can see him eating and swallowing my shit while Im still talking to her on the phone!Its hard to describe just how dirty, taboo, naughty and erotic it is. Speaking on the phone to a close friend who doesnt know about your fetishes WHILE shitting and seeing your slave actually eating and swallowing it.My slave was in for a surprise though. You see, after he ate my shit I stayed on the phone with her and he had to lick and tongue fuck my ass for me. This is where best fun starts. As he was doing this I unloaded the rest of my bowel movement in his mouth slowly.My slave Devoted Sub is a Master when it comes to eating a girls shit WHILE licking and fucking her ass with his tongue. I pushed out another two thick & creamy turds while he tongue fucked my ass and he made quick work of swallowing during this very direct feed. Unfortunately this along with my light orgasms did not go unnoticed by my friend on the phone and she got concerned with my moaning & groaning noises of orgasm pleasure. I did manage to convince her its just the cramps and Ill see a doctor lolFull Disclosure: This phone call was REAL. My friend got pretty concerned and phoned me back three times during the last 28 hours to check if Im okay. I told her I went to see the doctor and Im fine now lol It was quite the naughty & taboo experience for me and I suggest you all try it sometime lol This video is truly the best of both worlds. The first turd I pushed out is in full view for you to see my little asshole opening as it slides out. Also in perfect full view is the entire eating scene where my slave chew and swallow that turd for you. In the second part it also includes a direct feed where my slave kept his mouth tight over my asshole, licking and fucking it as I pushed out two more turds directly into his mouth. He swallowed them whole WHILE licking my ass. Although you cant see much of my shit in the second direct feed part I included this for the diehard direct asshole to mouth pooping fans. But the first thick & solid turd was pushed out, chewed and swallowed in full view for your viewing pleasure xoxo Be sure to check out my other videos including my girl on girl scat / toilet training videos in my store 🙂 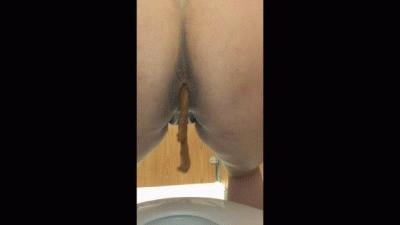 I was shopping at the Lakeside Shop Center, when a pressing need let me to find refuge in the bathroom. Now look closely at the flurry of shit. Who would want to taste? 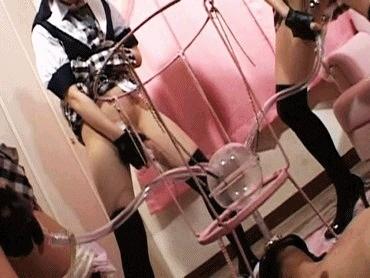 Another slave is given the amazing opportunity to consume a PEE cocktail delivered from multiple mistresses! Can you think of ANYTHING better? I thought not 🙂