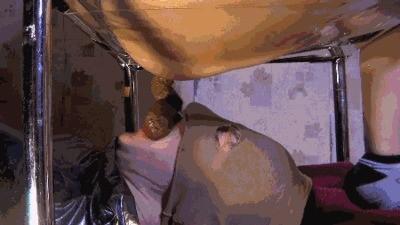 Mia is the most beautiful model of our studio. She is fond of humilating men and loves turning them into her slaves. 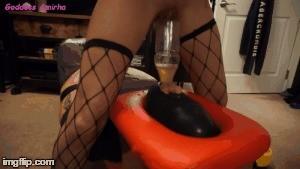 My bitch fiance is up to his usual bullshit again so I told him I’d allow him out of his chastity for a little while.. but only while he were tied up. He’s been dying to get out so of course he agreed. After letting his pathetic penis out of his cage I ordered him into the bench so I could have a warm seat to rest my ass against while I played his xbox. I secured him nice and tight, as he didnt know the hell I was about to unleash onto his nose.. I’ve been MEGA GASSY all day in class, having to run to the bathroom just so I wouldnt embarrass myself and stink up the entire class.. I still had the same Victorias Secret panties on that I wore to the gym earlier and I was going to change first.. but why not make him suffer the extra stench?! I threw on a nice garter set just to tease his untouched cock even further while I punish him as he lay helpless beneath my ass. Ahh yes, I thought as I lowered my ass and felt his nose enter my crack and rest against my hole.. Perfect. Now I can play without worrying about stinking up the room! His nose is just a perfect little tube to catch and absorb my NASTY ass farts that I’ve been having all day LOL. And lucky for him, they seem to be a little on the wet side, which will make breathing through the fabric of my panties even more torturous.. I let a number of bubbly blasts shoot straight into his nose before decided to lose the panties and give it to him full power, creating an air tight seal against his nose to receive my sulfur-like gifts. Which works extremely well, I still can’t smell a thing!! But judging by his body language and thrashing as each fart seeps its way into his nose, its not going as well for him down there. HAahah OH WELL!!.. After playing a couple of games, all that water I drank at the gym earlier is starting to hit me and I REALLY have to pee.. but I dont want to stop playing since I’m doing so good. But I kind of planned for this to happen I’m not going to lie, call me twisted.. SO I grabbed the make-shift funnel I had conveniently laying near by and ordered his mouth open.. How nice of me to think of how thirsty he must be after spending all this time down there catching all of my farts like a good little bitch.. Ahaha.. much better.. I remove the funnel and sit my asshole right back down onto his nose and rip another massive fart which rockets its way into his lungs.. MMMMFFMM… HAHA how terrible this has to be for you?!? A couple of games and another pee later It’s time he gets his final punishment.. and the entire point of this lesson.. I’m horny, so I need to get off. I pull down his pants and start riding his cock, vibrating my clit.. quickly approaching orgasm… Can I Cum?! He asks.. NO! Don’t you dare.. poor slave bitches don’t get to cum. You’re just my tool I use for my pleasure and relief.. And I finish on his cock leaving him throbbing.. You don’t get to cum.. You get to clean me.. I sit my soaking wet pussy right over his lips.. this is what slaves get… 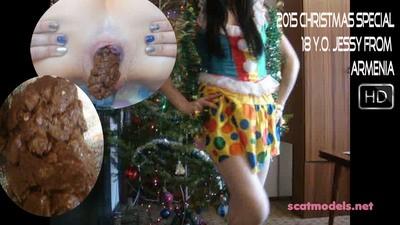 This is Jessica from Armenia, who wishes you a merry christmas and a happy new year!!Exclusive Xmodels Production!!

I press vigorously, so I finally get rid of this thick sausage going. She puts me four days in the ass !!