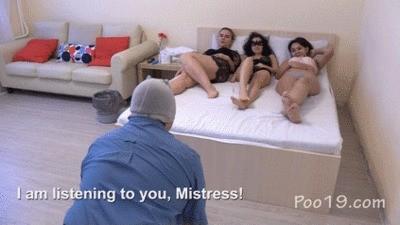 Good morning, Mistresses! Lisa, Amina and Christina had a very good time last night. They danced in a nightclub, sat in a cafe. Good dinner, delicious food, liquor… After that they decided to spend the night in Lisa’s apartment. They knew that after abundant meal, they will want to use the toilet in the morning. They will need service, so they invited a slave. The slave spent the night in the toilet room and waited for the girls to wake up.At first, the girls gave the slave to sniff their asses, and then used him as a toilet. Slave was very difficult. The girls gave a very large volume of shit. It was especially hard to eat Amina’s crap. Her huge piece of shit did not fit in the mouth of the toilet slave. But he could to do it. He ate shit of each of the three girls. After all, the greatest pleasure for him is to serve the girls, to be their toilet.

We Have A New Beautiful And Delicious Young Model Mia! 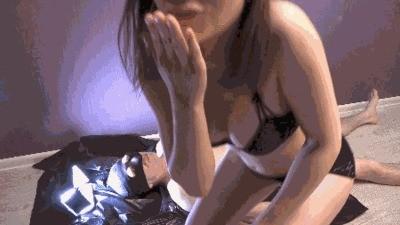 She’s the most beautiful model in our studio who loves BDSM. Her favorite hobby is to beat and humiliate slaves.In this video clip she gives slaps to a slave, spits in his face. Her tasty saliva comes out of her plump lips, which are sweet as berries … mmm …Mia makes the slave to lick her ass and eat her pad.She is just excited when slaves lick her ass. Now the slave falls under the toilet chair to be fully humiliated in front of this young Lady. Mia pisses in his mouth. But the slave must also lick her pussy and ass to make it shine. The Lady pisses in his mouth. Now she shits in his mouth, his mouth is full. The slave has to eat everything, otherwise she will beat him. Now Mia feeds the slave with berries and laughs at him.In other series, Mia will severely beat the slave. She loves torturing and humiliating the slaves, placing shit in their mouths. To be continued… 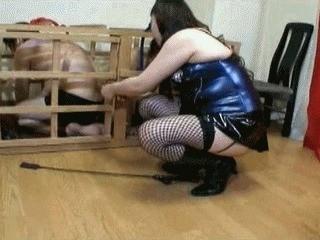 This domestic mistress has two slaves prisoner in a cage which is barely big enough for 1 slave! Today she is busy and she doesn’t even bother to let them out of their cage, but instead serves them sweet golden nectar in a bowl. Each are ordered to poke their head out of the cage to take it in turns to slurp from their mistresses dish!