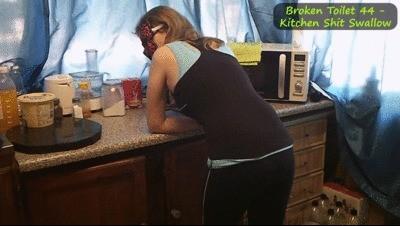 I just came back from the gym as you can see. It was a long & good work out and as Im leaning on the kitchen counter for a well deserved rest, giving you a great view of my beautiful body in my gym outfit I suddenly need to use the bathroom, a real urge to poop.Im feeling naughty, want to experience that feeling of doing something wrong. So I take my tight gym pants off, get out of my little G-String and as I lean on the kitchen counter I give into that deep urge to push.As I feel the thick & creamy warmness of my turds between my ass cheeks I moan in absolute pleasure from taking such a big shit. Right there in the KITCHEN! You can see from two different angles how thick, soft and long turds slowly slide of my asshole and hear the soft thuds of them landing on top of each other into a big pile on the shiny white kitchen tile floor. The smell is over powering but it feels so good to take such a massive shit right there I cant stop even if I wanted to, it just feels too good to experience this relief as you can hear from the deep breaths I take and my moans. I couldnt help it, I pushed out a lot of thick, long & creamy ones. Was a very big shit. You can see I really had to go!Finally I feel numbs from intense relieve as my bowels are empty but its quite a big & smelly mess on the tile floor. I have the urge to something even more taboo so I call my slave over and order him to clean up the massive mess I made, with HIS MOUTH!He starts off and shows his devotion and respect towards me by cleaning my ass with his tongue first. My asshole is feeling particularly sensitive and tender after such a big shit so his tongue licking the shit streaks of my asshole feels so amazing!Now that I feel clean and comfortable he has a very unpleasant task in front of him. He has to eat my pile of shit from the floor.I was particularly cruel as youll see. More than once you can see him struggle with some of my long & ticker creamy turds with a pleading look in his eyes and frown on his forehead. He really want me to show him mercy, to tell him he doesnt have to keep eating my shit. Instead I stand in front of him with my beautiful body I know he admires so much, filming him up close and talking to him constantly. Telling him how bad it must taste to eat my shit because the smell is quite terrible. He endures harsh suffering of seeing my sexy body he admires in front of him and all he gets from my beautiful body is the shit that he is tasting now, the shit that came right out of my asshole mere seconds ago.Hearing those gurgle sounds as he struggle to swallow only arouses me more!He has to keep going and you will see he had a hard time. But he did it, bite for bite, turd for turd he consumed every last bit of my entire bowel movement of that floor right in front of your eyes. All I could think of during his ordeal was how great it felt as those long and creamy turds slid out of my asshole moments earlier. I did not thank him for licking my ass clean, neither did I thank him for eating my entire pile of shit. I dont have to because HE is the fortunate one. Keeping him company while he was eating my shit and seeing my beautiful body the entire time.I wish there was a way to help you understand how amazing it feels for us women when a real man who is man enough honor her by eating her entire pile of poop right in front of her as a sign of admiration and respect. Be sure to check my store for my other clips including my Lesbian Toilet clips where my slave girl Chanelle is my toilet and swallowing my shit

He Is Pissing While She Ties His Cock 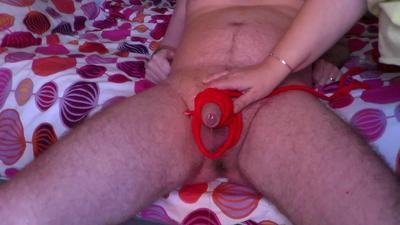 He is pissing while she ties his cock 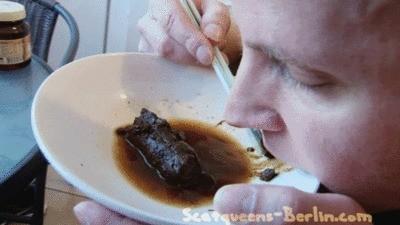