A Dutchman had written to me, because he had seen a FemDom video of me and wanted to experience the same. It was his first time, he had to swallow shit and piss! I grabbed him on his cock and lead him into a domina studio. There he had to lie on the floor and I put him nipple clamps on. Then I, spit it into his mouth and he had to swallow my spit. I then, sat down, on his mouth and shitting him into his mouth. On the beautiful turd in his mouth, I still have pissed on it! Since it was his first time he choked and vomited when he ate my shit. That made me angry and he got the whip from me to feel and I pressed a cigarette on his legs! The shit that he had vomited, he had to eat from the floor. Have there, his face pressed with my boots in my shit until he had eaten everything. In this case, the slave thanked, submissive, with me! 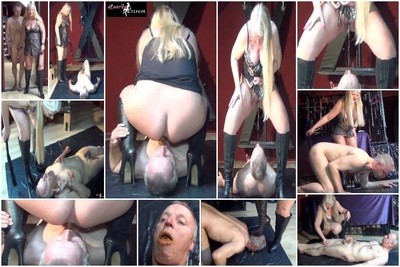