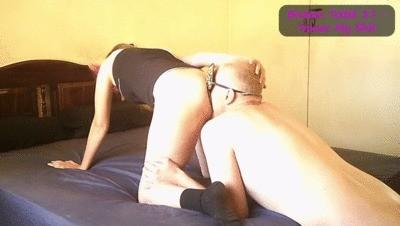 As my slave was busy licking and tasting my bowel movement I started to climax. In the middle of my orgasm I asked him How does it taste? Its the first time ever on video Im letting you hear what my voice sounds like when I talk DURING an orgasm. His answer Knowing it came out of your ass makes it taste great Goddess just intensified my orgasm contractions. He then did something amazing. He pushed his face into my shit, as much of it as possible into his mouth. Knowing how much he was suffering due to this send my mild & long orgasm into a POWERFUL one. I got quite vocal as you will see hehe My orgasm peaked and I noticed he must be swallowing because I could see two of the big juicy chunks of my turds were gone. Such a good slave to put himself through this for my pleasure! The last 10 to 15 seconds I stopped stimulation as my orgasm kept going by itself. You can hear it in my voice as I told him how good he looks (because of my shit on his face, tongue and in his throat.)How exactly does this work?Well its simple. Good men will honor a woman by smelling, kissing and licking her ripe & unwashed ass so she can climax (like I did in the first scene when my slave was licking my ass deep for my pleasure)But great men? Really great men will go the extra mile and let a woman take a shit right into their hands and then honor her shit as well by smelling it, kissing it, licking it and even swallow some of it so she can experience powerful multiple orgasms like I did in the second scene.I LOVE when I have these bowel movements. Those ones where the softer shit its way past the thicker juicy turds out of your anus. As those thick & creamy ones manage to slide out in between my lower body goes weak from pure pleasure.Guys Im not bothered cutting the scenes from videos these days when I orgasm. I LOVE the scat fetish and I think we as women should be more open about our desires for it and truly CELEBRATE scat! Im not going to apologize for having such intense orgasms during scat play anymore. Its who I am. When someone licks and eats my turds Im going to go wild from arousal every time and satisfy those urges by letting myself orgasm. I tell fans every day not to be ashamed of their scat fetish. Its time I practice what I preach and set the example as a woman who love scat.Shot from two angles so you can see my facial expressions as I watched him lick my shit and pushing it into his own mouth. The second angle show you this in much better detail but due to the sensitive microphone most of that shots audio is dominated by my moans of orgasmic ecstasy. Im a woman who is NOT ashamed to say I LOVE scat and toilet slavery! xoxo 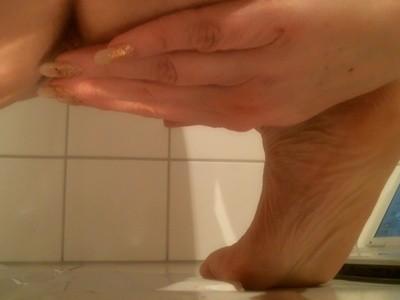 Taking A Dump In Public Shithole 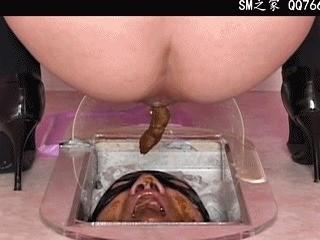 This is the shit lover’s equivalent of glory holes. People come here to look for shit instead of cocks. So he waits for someone to take a disgusting dump. Babe comes in and squats over the hole. She lets out a smelly and sticky bunch of turd directly into the guy’s mouth. He eagerly eats her shit and begs for more of it.