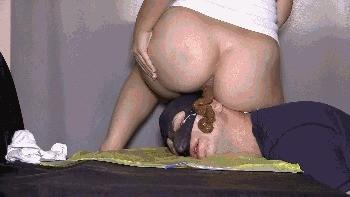 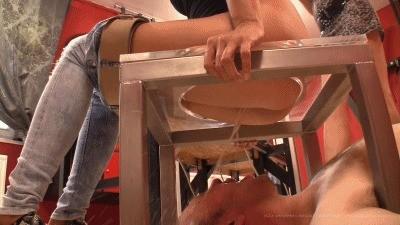 After a slave has been previously beaten hard by the Dangerous Girls (Video: The lesson under www.dangerous-girls.com), Miss Cheria already checked his usability as a full toilet. Now Miss Jane is on the way and will shit and piss in his mouth. On this one day, it is already his third encounter with his mistresses, until he was beaten, then used by Miss Cherie as a full toilet and now still Miss Jane is about to use him. But to his surprise, Miss Cherie is back again, she has to pee again and thus he now has to swallow the golden shower of two girls. Something nasty Miss Jane has planned for him, she shits a thick sausage on his burger and feeds him. Afterwards, his skull is again under Miss Jane, she was not finished with her toileting. The rest of her caviar, she shits directly into his mouth and advises him to swallow everything. In between, the girls amuse still with various painful games since rushing for a whip on him down, on the other hand Miss Jane is mercilessly with high heels on his skull and enjoys his pain. 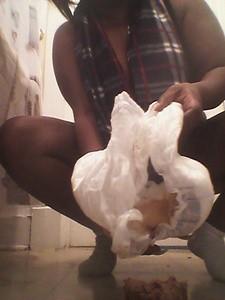 Did you miss her?? Mistress Raw Desires is at it again, this time she is shitting and pissing in and adult diaper. Tune in as she fills the diaper! then pulls it off, shows it off, then shakes her ass. This is a must see…