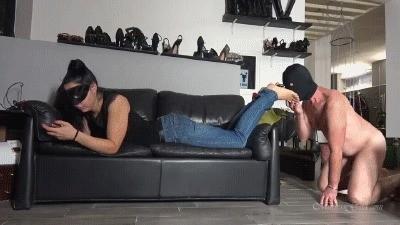 My bitch of a slave wants to enjoy some of the delights I have to offer. So I tell him if he makes a good jov of licking my shoes and feet I may reward him. As I answer some emails I tell him to begin with my feet. We progress, and I then want to see how good he with his face in my ass. He must remove my jeans anad fold them neatly. Then I tell him to kneel on the floor, and as I stand over him he has to firmly put his face in my beautiful ass. This is such a compliment to my bitch, as he is allowed the privilege of the aroma from my ass. As he’s been reasonably responsive to my requests. It’s time to allow him another treat. I’m going to allow him the luxury of enjoying my shit. As I tell him to get that mouth of his wide opan. I place my ass right into his face and relieve my shit straight into his mouth. He must swallow it all. I won’t accept any wastage, as I sit and make sure he finishes all of it. When I know he’s finished, I tell him to remain where he is until I return. However, just after leaving I realize that i need a pee. What a great way for my slave to wash down his earlier delight. I tell him to ready himself, and that I’m going to give him a extra treat. He is going to enjoy drinking my pee. As I stand over him I make sure his mouth is open nice and wide. Its a great relief as I direct my piss into my sluts mouth. What a lucky bitch he is to enjoy the flavour of my amber nectar. As part of his reward, I tell him he must make sure he sucks up any pee from the floor… 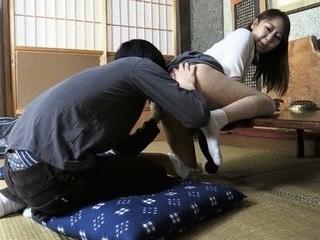 The younger guy is so eager to be her slave that he will do anything. ANYTHING. So the older woman tells him to go down on her and lick her cunt and anus. After servicing her, she takes off the young man’s pants to release his cock. They do 69 so she can suck his cock while he devours her moist cunt. She sits on his face and makes him stimulate her asshole so she can produce hot steaming turd right on his pathetic face.

Monster Shit Sausage For The Slave Under The Toilet Chair! Part 2 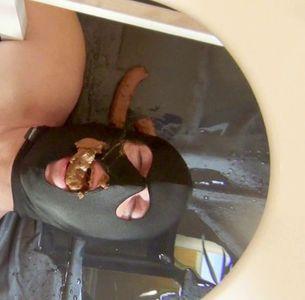 Part 2: Here I have one of my toilet slaves, which was below the toilet chair and there had to sleep, a monster shit ausage, shitting in his mouth, in my morning, toileting! During the record-breaking shit sausage plopped into his mouth, I had to pee and also I pissed him doing well in his mouth. Thereafter, the slave had to eat completely the big shit sausage. He was then totally exhausted, had to almost throw up and was close to fainting! This perverse mouth shit and shit-eating video, you can see from 3 camera angles!