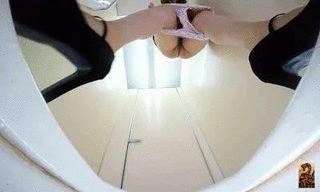 Checkered Girl is a shit fiesta when she decides to go. She has a soft, bushy pussy that she doesnt like washing, thus, has a darker tone to it. She would smell sour and salty at the same time. Her farts were banging loud, and in time for a thick, syrupy golden shower that you can bathe in because of how much there was every time. Her perfectly round anus would shyly pop half an inch before opening up more, giving you a great view of her mashed up shit trying to escape its confines. Her turd was a mix of golden yellow and orange, and was soft and mushy through and through. It piled perfectly on top of each other and began flowing in all directions when it landed on the toilets pristine surface. She pinched off several sections more, releasing a plopping sound and a divine acidic smell of innards every time.

Giving Birth To My Shit

Here I try something new. U see me on my back with my legs up, knees bent as if Im about to give birth. The difference here is that Im not giving birth to a baby, Im giving birth to some hot smelly shit. This one smells absolutely gross, stunk up my room for hours. I first take a pee, then show my pussy, next is the probably the smelliest shit Ive ever taken. It comes out nice and soft, some two tone colors. I hope u like, because when u like the more I want to make shit. kisses*** 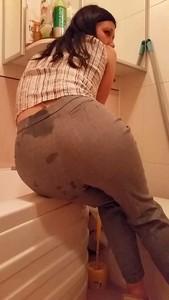 Ruslana is shitting in sexy office pants after work;)