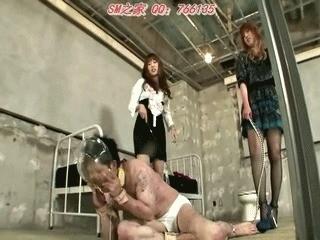 He’s willing to eat shit but he can’t swallow all of it at one sitting. The nasty ladies ain’t having it so they take turns whipping him. He does as he is bid and buries his face in the bowl full of disgusting shit. 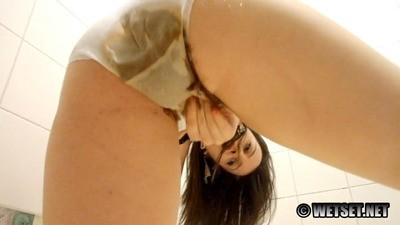 Danni had spent weeks trying to impress the new guy at work. When he finally worked up the courage to ask her out on a date, they clicked almost immediately and had begun seeing each other often. Danni couldn’t have asked for a nicer boyfriend and she was very happy, except in one area! Being a very sexual girl, she wanted to take things further, and was frustrated about how her new boyfriend was not picking up on this.For the last few weeks Danni had to settle for pleasuring herself, but tonight she plans on all that changing. She’s invited him for a romantic meal at her place! Wearing one of her sexiest dresses, Danni waits for him to arrive. As the door bell goes, her heart flutters at the thought of what’s going to happen tonight. Sitting down to their meal, Danni struggles to even make conversation. Her head is filled with dirty thoughts and the knowing that she’s going to get fucked tonight.The excitement make’s her tummy feel like it’s twirling around inside her. She carries on eating, hoping that she’s not making it to obvious how horny she feels. The strange feeling in her tummy continues, only slightly differently now. It feels more low down. Danni is a bit worried by this, she tries to keep acting normal but this feeling is getting all too familier. Then suddenly she feels what she’d started to dread. An uncontrolable urge to push! OMG I need the bathroom! I need to get to the bathroom so bad!Danni excuses herself, and attempts to make a dash to the bathroom. She’d only got as far as the dining room door when she felt the huge load explode in to her panties! The embarrassment and humiliation of shitting her panties in front of her new boyfriend was just too much! Danni can’t even bring herself to look behind her at his reaction.In her dirty, poop filled panties, Danni runs into the bathroom. Turning around and looking at herself in the mirror she is horrified. Everything is visable! Her panties are full and bulging, and the smell seems to be getting worse by the minute!Danni takes off her sexy black heels and climbs into the bath. With the big mirror right in front of her, she moves into different positions to get a look at her dirty panties from all angles. Looking at the mess begins to turn her on. The embarrassment she was feeling begins to turn to excitement. Danni’s pussy begins to throb and placing her fingers between her legs sends tingles all the way up her body. Stripping out of her dress, Danni begins to masturbate right there in the bath! Running her fingers all over her poop filled panties with one hand, and the other pumping against her pussy, she watches herself in the mirror. Just being in dirty smelly panties is enough to bring Danni to an orgasm, but being able to watch herself masturbate in them is something else!Danni continues to masturbate in lots of different positions, She wants to see every part of how dirty she’s been. She moans with pleasure, as she masturbates harder and harder until she explodes in to one of the hugest orgasms she’d ever had! Danni takes a few seconds to get her breath back before coming back down to earth with a bump and realizing that her boyfriend is still sat in the dining room. She pulls down her poop filled panties, slips her feet out and dumps the smelly pile in the bath next to her. Danni then turns on the shower and begins to clean herself up. Her bottom is so dirty!Once Danni is sure she’s cleaned off all traces of her smelly accident, she gets out of the bath and begins to dry herself. Slipping back in to her little black dress, she wonders if her boyfriend will ever speak to her again. She can’t help but imagine the look on his face when she shit her pants right in front of him!

Shitting In Front Of The Toilet 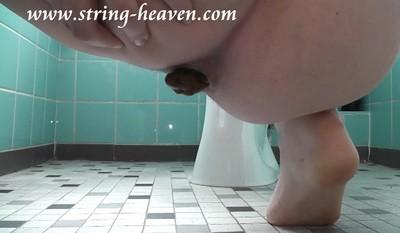 To the toilet I’m not make it. I’m shitting in front of it. I squeezed the sausage already so fucked up that I have previously lowered directly onto the tiles. Show me while. In the end you still get this gem of a really thick sausage to be seen. Will you have it?