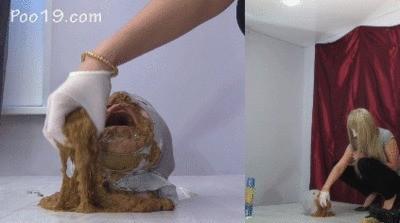 I was defeated 🙁 Today I was defeated, I am very displeased with myself! The first came to me Yana, she ate fish and kiwi, I felt the crunch of bones in my mouth. Yana poured a large amount of diarrhea into my mouth. When Yana started to shit, I took 4 big sips, but there was a lot of shit and it fell on the table. It is very difficult to keep liquid and warm diarrhea in the stomach and I immediately began to feel sick! I swallowed relatively quickly. Yana used me and left with pleasure. I hear the sound of the heels of the next girl, I don `t know who the next girl will be – Christina or Karina, but I’m already scared, because both Christina and Karina are very hard to swallow – Karina has a lot of it and it is hard and a little sweet, Christina almost always liquid and has terrible taste. Yana’s shit is also terribly difficult to swallow, but she was the first and I was empty. Karina came into the room with a smile and laughs – she is in anticipation of bliss, and with I am waiting for the next huge pile. I did my best! But at a certain point I was very beginning to feel sick and my throat refused to swallow. I used a stop word. Karina put the remnants of shit in my mouth and left. Then Christina entered the room. Despite the fact that I could not swallow, Christina made her urine drink and began to shit. I tried to start swallowing again, but when I felt the taste of her shit, I realized that today I was completely exhausted. Christina was unhappy, spat on my face and left. But most of all I was not satisfied with myself. I could not be a decent toilet for girls: (

Another Meal For My Hungry Slaves 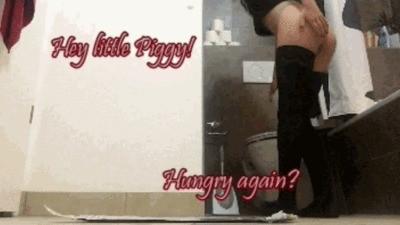 And again the lucky day for one of my slaves has come! He desperately begged me online for the permission to visit me and serve as my full toilet for a whole day.. including ALL service. ?But since I only accept slaves, that have already proven worthy of my delicious shit, he has one more task to master! He has to watch in detail, how huge the meal he will be tested with truly becomes and there is even more to come! ?Luck or fate? You decide ?

The Slave Drink Queen Queen Of Urine And Lick The Clitoris 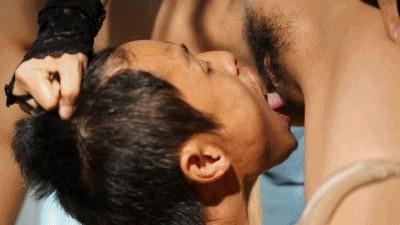 Slave very worship the queen’s meat silk stockings foot and the clitoris, lick it delicious feet and big clitoris, the queen put underwear on the head of the slave is a wonderful feeling. The queen of the butt sitting on the slave’s face, for the slave’s mouth began to pee