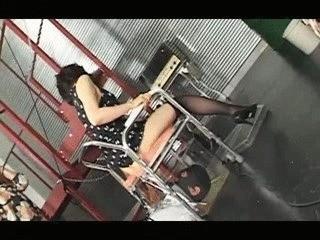 This is the best slave academy in the country and no one graduates from it without eating all the shit his throat can handle! This trainee is strapped to the floor and his head trapped in a portable toilet. The mistresses take turns sitting on the toilet and ejecting shit straight into his open mouth! You have to eat all of it, they said to him. He gobbles up the chunks of shit dropping from their assholes thinking that soon he will graduate and he will start earning his keep!`

Scat Goddess And Her Friend Use Toilet – Side Angle

Attention ! Full real shit eating inside !!! Best 2 Romanian Goddesses use and humiliate the toilet slave in 2 different situations. First one is using for her bdsm pleasures and giving him different tasks, and other (Scat Goddess ) is breaking the toilet psihically. He obey everything from both Goddesses and accept his fate to be a devoted toilet and slave. For Goddess Margo, he again tell her that he is ready to clean her asshole, if she will empty all her bowels inside his hunfry mouth. For this, she call him in the morning to eat her shit and creamy shit this time, and she surprise him with her yellow seethrough panties. She want to shit in panty, and sitting with her shit directly on ntoilet mouth, to suffocate him with her shit. Exactly she done that, and when she undress her panty, a huge shit landing on her toilet mouth. Slave was obliged to chew it and feel the texture of her shit and swallow it for a nice strocking, promised by Goddess at the end. She use his mouth for her dirty and kinky needs and pushing her foot deep inside, put her hand with glove nto his throat, put the panty and make him a gag, pushing her foot onn his mouth and didn’t let him to breathe until her sacred shit was inside his stomach . . .and more . . Enough with talking, see the movie from both angles, also from side angle is a nice movie to see how slave eats all his fresh meal ! 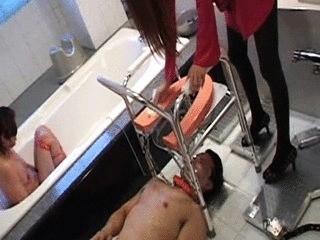 One of their own is getting hitched and they will be damned if they don’t hold the sickest bachelorette party ever! Male strippers won’t do for them, they need something hardcore. They called their trusty agency and have them send over their most submissive boys. They make the boys strip down to their underwear and make them wear blindfolds, chains, and other submissive accessories. They make them lie down under portable slave toilets and wait what’s coming for them. The girls take turns having their asses licked and sucked to prime for some shitting later on. After a while, the girls sit on the toilets and dump right into the boys’ mouths and make them eat every nugget of scat.