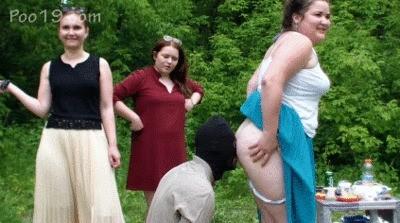 Please stop 2! He suffered long and hard – but it was his choice. This is one of my most cruel videos. Before shooting, the slave asked the girls to be very cruel, did not stop and made him eat everything! The girls did not stop until the end! The girls were upset that it all lasted a long time, it was stress for them, another toilet slave with whom they had to face difficulties. He broke loose from Lisa’s hands and spit out the shit, but Lisa picked up shit from the ground and again shoved his mouth, saying I will not stop!. 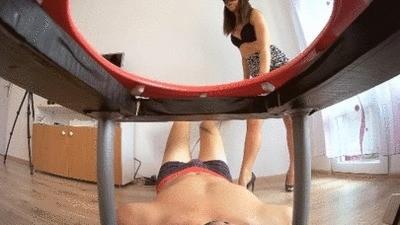 You are never done training a slave. You would think that being a toilet is fairly easy. There is not much to remember, but it still manages to forget what few duties it has. For instance, several times I whipped the slaves dick and it forgot to say Thank you! Annoying, I know. But at least it is an excuse to whip him some more. Oh wait, I dont need an excuse! On the other hand it, despite its forgetfulness, it is getting quite good at licking my asshole and I even moan with pleasure a little in this video. As the slave licks my asshole from under the toilet seat my asshole becomes engorged with power till it rises out from my luminous ass. Finally, I reward the pathetic worm with my fragrant gift. This time I give it a little surpriseSurprise! Diarrhea! It comes out all at once and makes a lovely pattern on the part of its body that used to be its faceback when it was human! I was so amused at the spectacle (the slave might have been amused but its mouth was otherwise occupied) that you get to hear my laughter as I look back down at the slave. The slave is so pathetic I make a sound that could almost be interpreted as sympathy. And as if my fragrant, semi-liquid offering was not enough to beautify its face, I even add my spit. Surprise, the slave forgets to say thank you. Fortunately, I still have my whip! A Mistresss work is never done! After seeing this video you will beg to be the hole where I deposit my diarrhea! REMEMBER, say ‘Thank you!,’ TOILET! 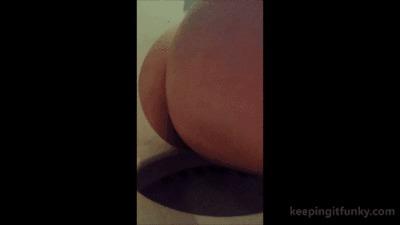 I swear I wasnt joking when I say the cast of Ladies Keeping It Funky is like Game Of Thrones. I try to tell folks dont lock in on one specific lady as she could be gone at any moment!! As most of my ladies (famous porn stars excluded) are 100% real women with real lives, MANY come and go. For whatever reasons. Because they get tired of it, or in some cases they just disappear. Some are gone forever  I try not to burn bridges, but sometimes there are BAD breakups, and sometimes some Ladies genuinely just cant be located. Take for example Todays Returnee Ms Andretti!Ms Andretti is a sexy PAWG Italian Cutie that popped up one Christmas Three years ago looking to make a little extra holiday money. She only did two clips and POOF!! She was gone (or should I say POOP!! She was Gone! lol). I was always hoping to get more clips from her as folks didnt really get to see much of her both literally and figuratively speaking. Anyways a week ago I get a surprise email from her asking Are you still looking for videos? I was honestly shocked!! Some of the return FUNKY ladies are ones I have personally tracked down that actually responded. Ms Andretti is the first to actually track me back down after such a long hiatus! Well not only is she back she is thicker than ever and with a vastly improved camera!! Enjoy her FUNKY reintroduction in a collection of farts, sharts and finally two ploptastic up close scenes!! She is still getting her bearings straight but she is a fast learner and has even more clips on deck behind this one!! That ass of hers is nice and plump now too!! She has only gotten thicker in the three years since I last saw her and mainly in the place that I like  that Azz!! Enjoy her FUNKY reintroduction!!

Direct Shitting From The Chair Into The Bowl – Part 2 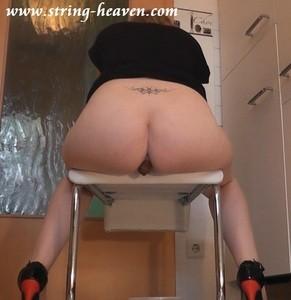 A chocolate-lover tasted my delicious sausages. I gave it to him directly shitting in the bowl, while the kitchen chair 😉 Continued from Part 1: As in Part 1 of the sausage was a little smaller, he got a second for free that you see in this video 😉