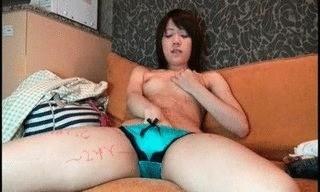 It has been a while since this woman has been able to defecate and in this situation, she finally performs all that she can to make herself! While sitting on the living room couch, she plays with her tits and clit to prepare herself for what she is about to do! Shortly after, she rubs a small vibrator on her pussy! Though, she doesnt spend much time on it, instead, proceeds with rubbing a much bigger variation of the device on her clit while finger fucking her asshole! Every time she pulls out her fingers, she manages to release a couple of lumps of feces! Despite this, she still isnt satisfied and feels that she could still do more! So, eventually, she attaches an apparatus on herself that is expected to induce a muscle contraction that would result to the release of her poop! When she finally turns on the device, a strong surge of her excrement comes out of her asshole, composed of both fluids and solids, resulting to a huge mess all over the floor! 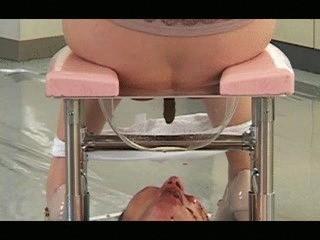 Her husband is away on a business trip and she’s bored. She has his blessing to do something fun and kinky while he’s away. She doesn’t fancy hiring a male escort to service her so she goes to the discreet toilet slave service that just opened in town. After paying the fee, she is granted access to the small room where her slave is waiting. She comes over to him and gapes at the setup – her slave lying down on the floor, a portable toilet above his face. She only has 30 minutes to do her business, so she takes off her panties and sits on the toilet. After a while, she was able to eject chunks of shit from her asshole, falling right into the slave’s mouth. She uses the metal prongs provided for her and places more chunks of shit in his open mouth. 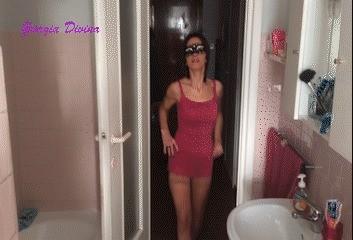 The Mistress decides that for the slave is the time to become his toilet. Thus begins a long training on more bets that will bring the slave to be a total toilet for the Mistress.In this episode, the slave is made to kneel in front of the toilet and starts getting comfortable with the golden rain of Mistress

Karey, Chelsea And The Toilet Slave 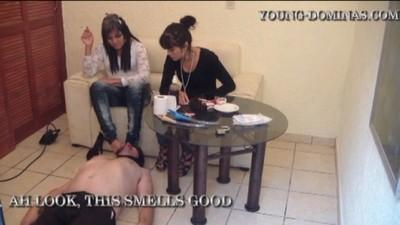 Girls uses man as her Toilet